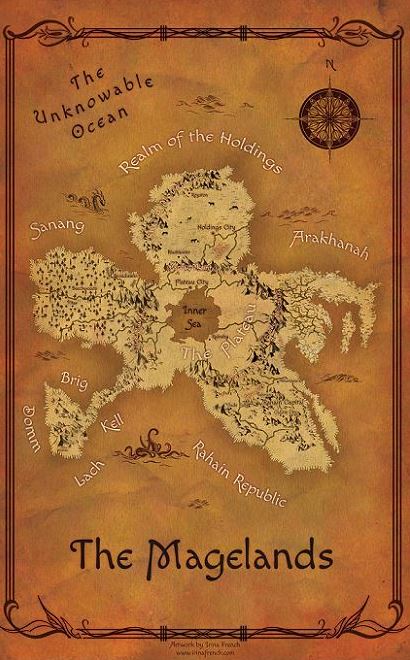 The Star Continent – though as Daphne the Vision Mage remarks more than once, it doesn’t look much like a star.

Daphne’s home is the Realm of the Holdings, the northernmost and hottest region of the continent. Ringed by mountains, the plains of the Holdings sweep for mile after mile of fertile farmland.

Arakhanah lies in the north-eastern point of the star, a low-lying land of marshes, dominated by Arakhanah City, a huge and densely populated conurbation.

To the south-east is the Rahain Republic, cold and dry, its inhabitants dwelling in seven cavern cities deep within the mountains of the Rahain Highands.

In the Star Continent, the weather comes from the west, and the spindly peninsula of Kellach Brigdomin gets the worst of it. A summer’s day here is wetter and colder than the mildest Holdings winter.

Also in the west is the land of Sanang, a region almost completely covered by a temperate rain forest, with no cities, or any other signs of civilisation.

In the centre is the Plateau, a green land surrounding the freshwater Inner Sea. At the start of the Magelands series, the Plateau is divided in two. The Holdings control the northern half, and the Rahain the southern.

A larger version of the map designed by Irina French is available here.